credit: essilorindia
Posted by Mahesh at 11:13 AM No comments:

How to transpose an eyeglass prescription easily !

Learn how to transpose an eyeglass prescription easily by learning a few simple rules!

Transposing a prescription is one of the most common actions when working in an optical laboratory, doctor’s office or even on a retail floor when an optician.  Some eye doctors prescribe eyeglasses in what is called plus cylinder, and others do so in minus cylinder.  Regardless of which is used, the prescriptions are the same.  This can be proven by transposing the eyewear prescription.

1. Add the sphere and cylinder powers to determine the new sphere power.
2. Change the sign of the cylinder.
3. Change the axis by 90 degrees.


credit: opticianworld, ehow, laramyk
Posted by Mahesh at 11:13 AM 73 comments: 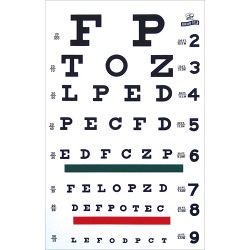 A Snellen chart is an eye chart used by eye care professionals and others to measure visual acuity. Snellen charts are named after the Dutch ophthalmologist Hermann Snellen who developed the chart during 1862. Vision scientists now use a variation of this chart, designed by Ian Bailey and Jan Lovie .
How to use the eye chart:
The Snellen Eye Chart is read while standing 20 feet from the chart. Be sure the room you are in is well lit but is not in full sunlight.
Test one eye at a time (cover the other eye with your hand or card etc.). The lowest line that you can read correctly is your visual acuity.
At 20 feet (6 meters) you should try to read the letters on the row 6th from the top. If you can read that line ok it means you have visual acuity of 20/40 or better: 1/2 normal.
Standing at 10 feet from the eye chart if the smallest letters you can read were on the 6th row from the top, this would give you an acuity of 10/40: 1/4 normal.
If you are nearsighted, your vision will become clearer the closer you stand to the eye chart.
Visual acuity (VA) is acuteness or clearness of vision. Especially form vision, which is dependent on the sharpness of the retinal focus within the eye, the sensitivity of the nervous elements, and the interpretative faculty of the brain. VA is a quantitative measure of the ability to identify black symbols on a white background at a standardized distance as the size of the symbols is varied. The VA represents the smallest size that can be reliably identified. VA is the most common clinical measurement of visual function.
A visual acuity of 20/20 is frequently described as meaning that a person can see detail from 20 feet away the same as a person with normal eyesight would see from 20 feet. If a person has a visual acuity of 20/40, he is said to see detail from 20 feet away the same as a person with normal eyesight would see it from 40 feet away. Someone with 20/20 visual acuity does not have "perfect" vision, since it is quite possible to see better than 20/20. The maximum acuity of the human eye without visual aids (such as binoculars) is generally thought to be around 20/10 (6/3).
Recent developments in optometry have resulted in corrective lenses conferring upon the wearer a vision of up to 20/10. Some birds, such as hawks, are believed to have an acuity of around 20/2; in this respect, their vision is much better than human eyesight. Many humans have one eye that has superior visual acuity over the other.

The normal height for the letter A is 88 mm, and the viewing distance is 6 meters.
To properly view the chart on your monitor:

The final number is the distance (in meters) that you should stand from the monitor. For information on using the chart to determine your visual acuity.

Here You can find all types of progressive lenses engravings!
Progressive Lenses
check below for Quick Reference:
AO SOLA