All about Polarized Lenses!

Polarized lenses are used in sunglasses to reduce glare from reflective surfaces such as the surface of a lake or the hood of a car. They accomplish this feat through a process called polarization, much like a venetian blind controls sunlight through a window.
Sunlight itself is not polarized - light from the sun will either be absorbed or reflected horizontally, diagonally or vertically. The problem this causes for fishermen and drivers lies in the horizontal reflectivity. Sunlight bouncing off a horizontal surface will strike the viewer's eyes at a similar angle. This means the glare from the surface of the water or the road or the car hood will be strong. Polarized lenses have a laminated surface containing vertical stripes. These stripes only allow vertically-polarized light to enter the wearer's eyes. Glare is eliminated because the horizontally-polarized lightwaves cannot bypass the polarized filter.
How Do Polarized Lenses Work?
Polarized lenses contain a special filter that blocks the reflected light and reducing glare. Though polarized sunglasses improve comfort and visibility, you will encounter some instances when these lenses may not be advisable. One example is downhill skiing, where you don't want to block light reflecting off icy patches because this alerts skiers to hazards they are approaching.
In addition, polarized lenses may reduce the visibility of images produced by liquid crystal displays (LCDs) found on the dashboards of some cars or in other places such as the digital screens on automatic teller (bank) machines. With polarized lenses, you also may be unable to see your cell phone or GPS device. Boaters and pilots also have reported similar problems when viewing LCD displays on instrument panels, which can be a crucial issue when it comes to making split-second decisions based strictly on information displayed on a panel. However, for most other sports and activities, polarized sunglasses offer great advantages. And today, many polarized lenses are available in combination with other features that can enhance outdoor experiences.
Whether you spend your time waterskiing or boating, in-line skating or mountain biking, driving or jogging, polarized sunglasses may be the right choice to help you enjoy your life outdoors.
Why are polarized sunglasses better than normal dark sunglasses?
Normal sunglasses decrease the intensity of everything by the same amount. Polarized sunglasses can selectively eliminate the reflection from light coming from above the water surface.
Could polarized glasses be crystal clear?
No, they will always decrease the intensity of unpolarized light by at least half. In practice somewhat more because of losses in the material.  They come in all shades from light gray (only polarizing) to very dark (polarizing plus black tint), and also light sensitive (photochromatic).  You can even find sunglasses with darkness adjustable by the user.
Do polarized sunglasses help see fish and rocks below the water surface?
Yes. First, if there is glare, they help a lot by reducing its blinding effect. Second, even without glare they selectively reduce other reflections from objects above water, including clouds and even the sky (the reflected sky gives most of its blue color to the sea). Finally, light coming from under water is slightly polarized in the vertical plane (polarized on transmission). The end effect is that the water seems darker but more transparent! But remember, it only works if you look at the water at some angle and not straight down.
Does it matter the time of the day? 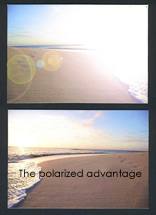 Yes. Maximum polarization is obtained when the sun is at about 37 degrees from the horizon (in theory 100% polarization at the Brewster angle). If the sun is very low or very high the sunglasses will be of little help in filtering the glare in calm seas. A rule of thumb would be that polarized filters limit the glare from calm waters for a sun altitude between 30 and 60 degrees (but see next question). Anyway, it should be stressed that polarization won't help in looking directly at the sun (except in decreasing the overall intensity of everything by half).
Does it matter the choppiness of the sea?
Yes. When the sea is ruffled the sun reflection becomes the familiar glitter, an elongated pattern of shimmering water stretching towards the sun. Because different parts of the glitter are reflected from different wave slopes, the degree of polarization varies from place to place. In those conditions the sunglasses will also help for high or low suns and the benefit will depend on where you are looking.  As a side note, the width and length of the glitter together with the altitude of the sun can be used to compute the height of the waves without ever getting close to them!
How do the polarized sunglasses help when driving a car? 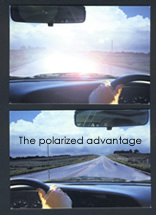 Those pesky bright reflections of the sun on the cars ahead can sometimes be attenuated a good deal. They tend to be horizontally polarized, thus perfect for vertically polarized sunglasses.  The reason is that the surfaces that you see on the car in front of you (the back window, the trunk door, and even the roof) will be slanted towards you, while the sun will be more or less aligned in the vertical plane through both cars (if not you wouldn't see its reflection from those surfaces). However, if the sun is relatively low behind you, the sun rays will be near perpendicular to the reflecting (vertical) surfaces which won't polarize the light.  The sunglasses will help more with the reflections from the glass than from the metal as the former are polarized to a higher degree.  What about the brightness of the road itself?  That light is also partially polarized, but by scattering (as opposed to reflection).  The direction of polarization will change with the direction of the road with respect to the position of the sun.  The rule is that the polarization is tangential to a circle centered on the sun.  That means that if the sun is in front, behind, or high above, the road brightness will tend to be horizontally polarized and the filter of the sunglasses will provide some help.  However, if the sun is to one side, the polarization will rotate vertically, the more so the lower the sun happens to be.  Of course, if the road is wet you get the same anti-glare power than at sea.
Can polarized sunglasses help in skiing and other non-water sports?
Sometimes yes, sometimes no. The snow glare is not polarized, so they won't provide extra help in that regard (although often advertised for that purpose). But, with the sun high, the air-light (haze + sky) near the horizon is polarized by scattering and the polarized sunglasses can make features far away really stand out (this is used in fire detection). On the other hand, with the sun low the sunglasses could be detrimental looking south or north, as the air-light would be vertically polarized. Other situations can be thought were they would be useful, but remember that one reason they are so good in water sports is that the reflector always remains horizontal!
Can I use my 3-D polarized glasses for fishing?
Not a very good idea.  The filters on those glasses are oriented at 90 degrees to each other, almost always at +/- 45 degrees with respect to the line joining the temples (generally the transmission axis points down towards the nose).  Thus, horizontally and vertically polarized light will be attenuated equally.  In addition, you can get a bad case of dizziness: the left and right eyes may see polarized objects with very different intensities, confusing stereovision and resulting in vertigo (the same effect as produced by the glistening of the snow).  It wouldn't be very kind to give them to your mother-in-law the next time she invites herself to your boat.
Advantages of Polarized Lenses
Features
Benefits
Ref: wisegeek, allaboutvision, polarization,spectacleworld, ehow, nightdrivingglasses
Posted by Mahesh at 4:18 PM